After my wife and I married in 1992, we worked to build up the churches where I was at that time, Belfast and Midway UMC near Cedar Bluff, Virginia.  Around the end of 1993 I began to sense that it was time to move on.  Nearing the finish of my first run as pastor of a charge, I began looking forward to the chance to start fresh somewhere else.  And I looked forward to going into the next appointment as a couple with my wife in tow. 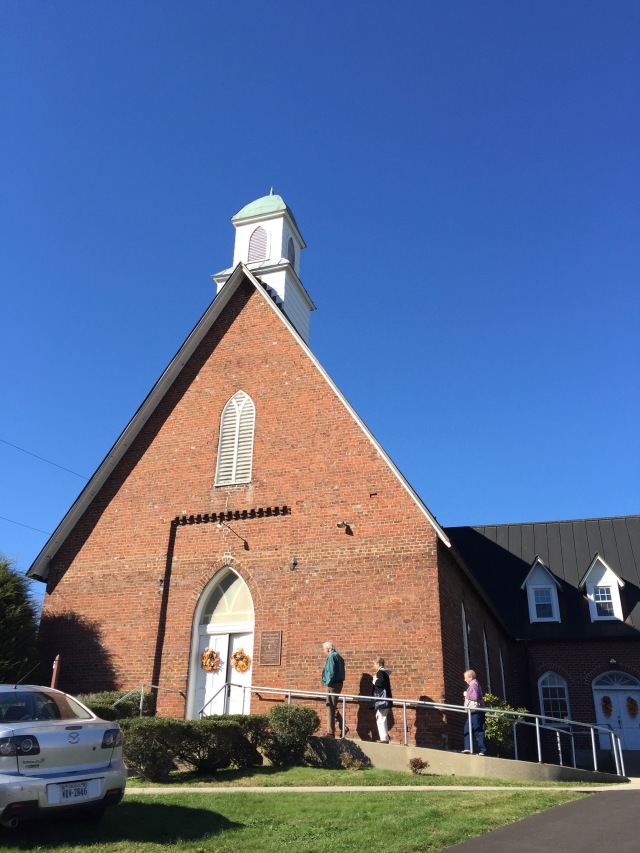 So we started praying and I tried to prepare my young bride for the possibility of a move anywhere within the boundaries of Holston Conference (which is composed of UM churches in Southwest Virginia, from Radford west to KY, and east Tennessee (as far west as Oak Ridge and Dayton), and as far south as the northwest corner of Georgia.  That information brought her absolutely no comfort, but she maintained that she would go wherever I was appointed.

Then we were told our projected appointment was going to be in Tazewell District, in the town of North Tazewell.  My wife and her prayers put us within a 12 mile drive from her mom and dad in Bandy, Virginia.  We had struck gold.

North Tazewell, Virginia is a town that developed along the railroad when the N&W was built through the Clinchfield region.  Because the town of Tazewell was built on a hill, and the railroad could do better by staying closer to the Clinch River, the depot and other buildings were built north of the county seat.  The town of North Tazewell was soon incorporated as a separate community.  Tazewell had first been called “Jeffersonville” and then Tazewell Court House.  Developers decided to try to develop a “resort” community between the old court house town and the new North Tazewell area.  That planned development placed several homes on the hills between the community.  It also led to building a street car system that would haul passengers from the train depot in North Tazewell all the way up to Main Street in the court house district of Tazewell.  In-between Tazewell and North Tazewell the community was named “Car-line” after that street car.  Others called it “Shake-Rag.”

The North Tazewell Church was established in the 1860s in an area just north of the depot town, up Whitley Branch, on a hill now covered by a subdivision named “Goose Creek Estates.”  It was referred to as “Gravel Hill” in those days.  A little white, wood-frame building was erected there to serve the needs of people in the area.

After the train depot was built in the 1880s, the church decided to move to town and tore their building down piece-by-piece.  They rebuilt it right beside the train tracks, near where Repass Barber Shop is today (with the sign that says “We need your head in our business).  But due to the noisy situation of trains shifting at the water tank near the church’s new site, they found the location unsatisfactory.  About this time the Lutherans, who had built their church of brick on a large lot on the north side of Riverside Drive, decided to abandon that location to move to a lot across from Tazewell Presbyterian Church in the county seat.  That left their beautiful brick sanctuary up for sale.  The Methodists decided to buy it.  And they made it their new home.

The church grew to be a strong little church, supported by families who were related to a local grocery store chain.  One family took responsibility for renovating the sanctuary in the 1940s, making it look very much like an little English Chapel, with built-in pulpit and kneeling rail, and exposed wooden rafters.  They did this for the wedding of one of their daughters.

By the time I got there, most of the grocery store employees were retired and it wouldn’t be long before that chain discontinued operating.  In fact the church as a whole was composed of several senior members (people in their 70s, 80s and 90s).  Just one or two younger families were there, and they struggled to keep Sunday School going for their kids.

While I was there the congregation had a rebirth.  About the second year into my time as pastor, people started showing up.  The congregation swelled from 30 some in attendance to over 80 some Sundays.  People who had stopped coming returned.  New people came, and soon there was a buzz in that church as ministry began happening and God began doing a work among us.

We ran out of room.  Two things happened to help with that.  A lady who owned property behind the church decided to sell, but she told everyone she would never sell to “those Methodists.”  So one of the families in the church bought the property and sold it to the church.  That gave us room to expand some parking, and think about using the property for new ministry.

Across the street from the church was the old Town Hall.  North Tazewell had been a separate town until the late 1960s or early 1970s when the cost of keeping the town up just became too much and they decided to merge with the town of Tazewell.  The grocery store chain decided to take the town hall and use it for a produce warehouse for a few years, but by the time I came there it had been pretty much abandoned.  We kept looking at it and wandering what it would be like to own that.

After much discussion, I called an agent of Acme Grocers and just asked what it would cost to rent, lease, or buy that property.  The man was very interested in my questions, and told me to let him check around and get back to me.  I figured that would be the last I’d hear from him.  But I was wrong.  A couple weeks later he called me and said:  “Brad, we have decided to give your church that building.”

The next few weeks were exciting as the congregation dreamed how they could use it.  They decided to open a thrift store.  It is still running.  It is called “Lilies of the Fields,” referring to Jesus stating in the sermon on the mount:  “Consider the lilies of the fields . . . ”

It was at North Tazewell that I finally got to meet my famous actor-cousin, George C. Scott.  My dad’s second cousin, (my second cousin, once removed), he was in Tazewell County to make what was his final movie, a made-for-tv movie that was named “Country Justice.”  I met the people who were setting up places to film, as they were inquiring about churches, and wanted to look inside North Tazewell Church as a possible film site.  They decided not to use it, but they invited me to come to the film set one day and meet George.  I went on a day when snow was piled up about 8-10 inches.  They told me he didn’t like to meet people and he never liked to get out of character while he was filming, but that he had agreed to give me 5 minutes.  I said, “That’s plenty for me.”  Soon I was shaking hands with the man who turned down an Academy Award for “Patton.”  I have had a better time talking to some of his close family than I had talking to him, but at least I can say I met him.  I wonder if he ever told anyone he met me?

Tammie and I left North Tazewell after five years.  We had loved the congregation and they had loved us back.  We shed many tears and hugged many necks as we left.

An Appalachian CrossFitter who loves Jesus and is happily married to Tammie. I have a son and a fine little grandson. In the peak of middle age, trying to figure out the rest of this journey.
View all posts by Brad Scott →
This entry was posted in Uncategorized and tagged Bandy, Car-line, Clinchfield, George C. Scott, Holston, Jeffersonville, N&W, North Tazewell, Railroad, Scott, Shake-rag, southwestern Virginia, Tazewell, Tazewell County, United Methodist Church. Bookmark the permalink.