History of a Part of Weber City, Virginia

There’s dirt moving down at the river in my home community of Weber City, Virginia.  Today’s paper (Saturday, February 6, 2016) talks about an industrial development on the old Bray farm.  I thought I might should enlighten folks about the “Bray” place.

There was a time that Weber City didn’t exist.  But there was a community there with a post office that had a different name.  The community grew up along a route that connected Estillville (now “Gate City”) with the Tennessee communities surrounding Kingsport.  This wagon road crossed the river at a ford just a few hundred feet west of the present bridge across the North Fork of the Holston River on today’s US Highway 23.

The south side of the river was property belonging to the Akard family (of whom I descend), and the north side of the river contained land owned by the Wilhelm family.  The Wilhelm family operated a post office and the community was called, on early maps, “Wilhelm.”  The Wilhelm cemetery sets on a hillside fronting the northbound lane of US Highway 23, across from Roberts’ Tires & Recapping Center, with a concrete retaining wall along the western edge of the grave yard.  Ancient graves are in this little cemetery belonging to several members of this family.

A quick run-down of their history goes something like this:

A man named George Wilhelm and his wife Rebecca came to Sullivan County, Tennessee from Maryland between the time of his birth in 1790 and the birth of their son Charles in 1814.  Charles Wilhelm was born 24 January, 1814 at Sullivan County, TN.  By 1836 Charles was living in Scott County, Virginia, at the site of the “Bray” farm, and married a woman by the name of Adeline Davidson that year, when he was 22 years old.  This couple had at least 9 children, including six girls and three boys.  One of the boys was Joseph Herren Wilhelm, b. 1846, d. 1936.  Joseph married Mary Catherine Grimm in 1868, after he returned from the Civil War.  Together this family had at least three known children, William, Robert C., and Richmond C.  William married a Godsey, and Robert C married Lydia Kinser.  Robert and Lydia raised eleven children, three boys and 8 girls.

Sometime around the 1880s the Wilhelms built a house on the farm at the river.  It looked like this:

Home of the Wilhelm family. House was replaced by the Bray house at a later time.

The picture was supplied to me in the late 1970s by John Robert Wilhelm, known as “Bob,” who was a brother to Joe Wilhelm who lived at the intersection of the Yuma Road and the old Yuma Road in a log house that was built in the 1930s, and later in the brick house that still stands nearby.  Joe is the little boy in the front of this picture with the cap on.

There was an interesting relationship between the Wilhelm family and the Rogers family.   The Rogers family was a black family who lived with the Wilhelms prior to the Emancipation Proclamation.  The 1870 census shows the Charles Wilhelm family neighbors to Harrison Rogers (with Edith, Houston, Elizabeth, Frances, James, and Elmira).  It is known that this 1870 census is the first census to list black residents, and it is likely these were former slaves.  The Rogers family eventually  moved to Gate City, but they were instrumental in helping the Wilhelm farm survive during Reconstruction.

You’ll have to trust me on this one, because there is no documentation to back it up, but there is a slave cemetery on the Bray farm, located between the house and the big old barn. There was a garage at the end of the driveway, and near it were some evergreen trees.  At one time this was the site of the cemetery, with field stones marking graves.  Bob Wilhelm told me and my grandfather that the family that bought the place from his family removed those gravestones several years ago and there was no visible sign of the graves.  There were probably several folks buried there.

A steel bridge was erected over the Holston River in front of the Wilhelm farm in the early part of the 20th century.  At one time the post office for the area was known as “River Bridge.”  Later the service station at intersection with Highway 23 and Wadlow Gap Road was built and the fans of the Amos and Andy show stuck “Weber City” in the window, and as we know, the residents of the young community embraced that name for the area from the river to Moccasin Gap. 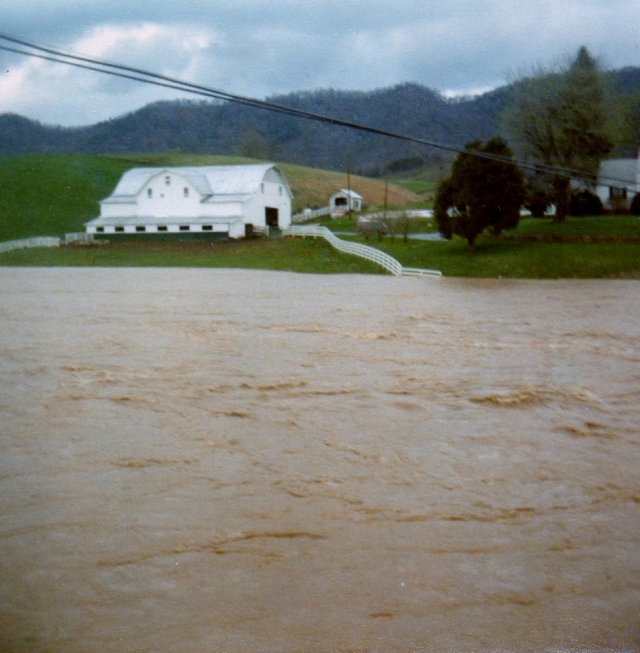 It is my hope that the new industrial park will bring jobs and livelihood to our little community along the river, but let’s not forget there were people here before us.  I hope Weber City will prosper.

An Appalachian CrossFitter who loves Jesus and is happily married to Tammie. I have a son and a fine little grandson. In the peak of middle age, trying to figure out the rest of this journey.
View all posts by Brad Scott →
This entry was posted in Uncategorized. Bookmark the permalink.

10 Responses to History of a Part of Weber City, Virginia