“Little birdie, little birdie.
Come and sing me your song
Got a short time to stay here
And a long time to be gone”

(Listen to a version of this song by the legendary Dr. Ralph Stanley at https://www.youtube.com/watch?v=80if-yp-tdc) 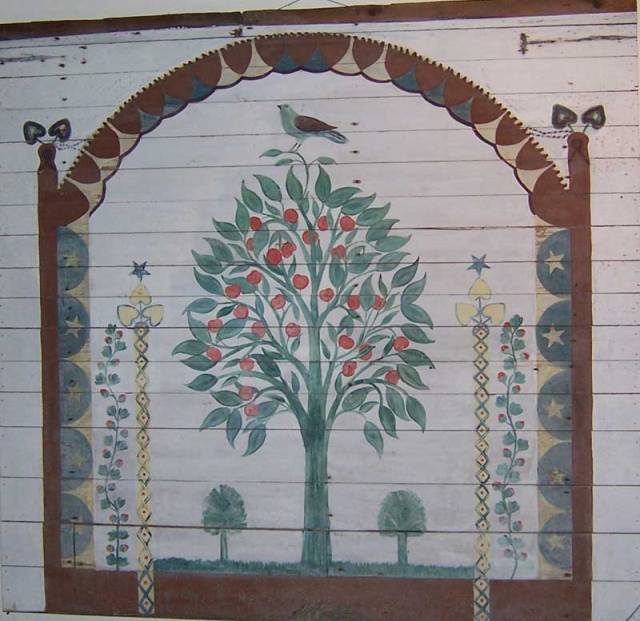 Detail of a folk painting that once adorned a home in Scott County, Virginia, depicting the tree of life.

Appalachia is a region that is both loved and hated by America.  It is loved for its natural beauty, crafts, stories and songs.  Yet it is the subject of ridicule for its poverty, lack of coherence with modernity and abundant superstitions and apparent backwardness.  The oft-quoted saying is that it is a “strange place, peculiar people (as in Henry Shapiro).”  Yet it serves in a larger way as the cultural attic of America, a place to keep memories and honor the past.

But the Appalachian region has fallen upon hard times of late.  As the older generation has passed away, many of the old ways have fallen into the ash heap of history.  Economic forces and political policy are robbing the region of its long-counted-upon treasure (coal), and forcing the young to choose between leaving the area for opportunities elsewhere or falling into the despair of addiction to prescription pain killers (referred to as “hillbilly heroin”) or worse.  Hopelessness is gaining a new foothold in the hearts of the people of eastern Kentucky, southern West Virginia, southwestern Virginia and east Tennessee.

Near where I live lies one of the poorest counties in the United States.  McDowell County, West Virginia was once a bastion of coal development.  At one time it was a powerful producer of the “black gold.”  But by the 1950s things changed and the population quickly dwindled, homes were abandoned and communities began a long decaying process.  This has been captured masterfully in Elaine McMillion’s interactive documentary “Hollow.”  (Which you can find at this link:  http://hollowdocumentary.com/).  In spite of decades of despair, hope is not vanquished.  There are trickles of renewal beginning to take place, but the hope of coal mining returning in a big way is pretty much missing on anyone’s dashboard of life.

Public policy over the last seven years from the federal level has added to the demise of an already languishing industry.  Coal mining was not attracting new workers as young people were unsure about working for an industry they perceived had taken so much from their forebears in terms of health and well-being.  A job fair about a decade ago drew very little interest from the young for jobs in the mining industry.  President Obama’s efforts to clean up the planet have made fossil fuels almost anathema.

We are living in a time of population loss not only in McDowell County, but throughout the Appalachian region.  Very small pockets of the population are growing, but the vast majority are in a tailspin.  The school-aged children demographic is diminishing.  Young people, if they get to go on to higher education, will find other places to live and work, where job prospects are much brighter.  There are few major metropolitan areas in the region, and the prospects for major employers entering the area to revive the flailing economy are bleak at best.

So, many Appalachian people are finding their way into a renewed “Appalachian Diaspora.”  Scattered into far-flung areas of the country, and the world at large, they are facing choices.  Either they can try to fit into new communities, or choose to keep the elements of home and mountain culture as best they can within new contexts.

These are the exact choices that were made when European immigrants first found their way to the shores of this continent.  They brought with them their trades, their knowledge base of stories, their faith, their music, and their familial ties.  As they wandered into the sea of mountains, they established their homes as places to be free to live as they wanted.  Here they preserved portions of their older European culture as they passed down songs and stories from previous generations.  They adapted to their new surroundings by learning from native Americans, often adopting native cultural elements like farming and use of herbs, and sometimes marrying into native families.

This isn’t the first diaspora for Appalachians.  There have been times other generations found themselves needing to relocate to support their families.  They often made their ways to industrial centers in Ohio, Michigan, and other areas.  Stories abound of hardship and discrimination that was encountered in that first diaspora.  Today families are traveling south and west.  Hardship is still possible.  Mountain accents are distinctive.  Dialect can even be lost as one finds the reception of it not very friendly in population centers.  The loss of cultural memory will be complete in a generation or two away from the region.  In the mean while, the best of Appalachian culture is celebrated through departments at some of the regional colleges, and in museums that remain scattered through the region.

For those who remain in the region, life is not very hopeful right now.  Their despair is a very present issue for which no easy solution seems available.  Someone recently told me “we are raising a generation of feral children.”  This pattern seems to be set to continue for an unknown period.  Somehow, some within the Appalachian region have lost the independence and self-reliance of previous generations, and have become susceptible to the “entitlement mentality” that grows from dependence upon the welfare system, with utter reliance upon substance abuse and a life lived with no desire for betterment.

The psalmist wrote:  “I lift mine eyes unto the hills.  From whence cometh my help?  My help comes from the Lord, who made heaven and earth”  (Psalm 121:1).  I truly believe that there is a source of grace that will bring hope once again out of the despair of Appalachia.  God has not abandoned us.  In fact, I think it is possible that there are already new things being born here that will bear fruit in the future.  There is a strength in mountain people that persists throughout the storms of life.  May it ever be so.

An Appalachian CrossFitter who loves Jesus and is happily married to Tammie. I have a son and a fine little grandson. In the peak of middle age, trying to figure out the rest of this journey.
View all posts by Brad Scott →
This entry was posted in Uncategorized and tagged appalachia, Appalachian Mountains, Appalachian Region, coal economy, culture, despair, diaspora, end of coal, hope, hopelessness, Memory, music, region, self-reliance, stories. Bookmark the permalink.

2 Responses to The Appalachian Region Has Died. Long Live Appalachia!