How We Built the New Church

The year before I was born, Morrison Chapel burned to the ground one January morning.  Our preacher had gone over to start the furnace that Sunday morning.  Before he got all the way back across the parking lot to the parsonage, he heard an explosion, turned around and looked to see flames shooting out of the old building.  There being no  volunteer fire department in those days, the building was a total loss.  My grandfather told me that he took his tractor and pulled together the old log seals that were the foundation of the church, allowing them to completely burn.  He noted with sadness that his father had helped dress those logs whenever they built that building.  The wood framed structure that sat atop the four logs burned up quickly. 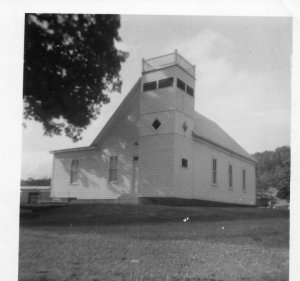 The chapel that stood in Morrison City until 1963

Reportedly, there were mixed feelings about this fire.  Many people had enjoyed a life in the Spirit at this church, and the building had come to symbolize their faith home.  It sat perched on a hillside on the north ridge of West Carter’s Valley.  An old, expansive Red Oak tree sat in front of the old building, adding a sense of majesty to the white building.  Pictures of the congregation taken in the 1950s show that they had the odd old habit of sitting segregated by gender, women on the right as you came in, and men on the left.

These were farm families, many of whom had gone to work in the factories in Kingsport as those jobs developed, but maintaining a garden spot and perhaps a few acres for livestock near their homes.  But as the Morrison City neighborhood developed, they came to experience a different kind of life apart from the old farms.  They were proud to send their sons and daughters to the neighborhood school at Bell Ridge.  Life for these people revolved around family, and families were close-knit, many of the congregation having some degree of kinship to one another.

Perhaps this closeness is why it was easy for them to pull together and rebuild.  They worked closely with officials from the annual conference to plan a new building.  They had already expanded a little, having built a basement to the west of the old chapel, which contained a dining hall, and about four classrooms.  The plan was to build a new chapel above the basement, but there was resistance to this notion since the old chapel had become so beloved.  The fire solved that problem, and the whole time the fire burned, the wind blew from out of the west, keeping the flames off the basement wing.  It was in the basement dining hall where the church continued meeting, worshiping and sharing fellowship together.

Fundraising commenced with great enthusiasm.  In my part of the country, it is often the case that churches will sell applebutter.  Apple butter is made by taking several bushels of apples, which in those days were picked off local trees and donated to the cause.  The apples are then peeled (in a community function, much talking and laughing taking place, bonding the people in community).  Then the next day people gather early in the morning around several large old brass or copper kettles, over open fires, outside of course.  Someone has to stir each pot constantly to prevent the apples from burning.  Long-handled “stirs” hand-made just for the occasion are used.  Stirring becomes a social event.  People step up to relieve the stirrer, taking turns, as hour after hour the apples cook down.

Finally sugar is added and the apples begin to turn dark.  When the applebutter is placed on a plate and the plate held on a slant, and if the applebutter doesn’t run too badly, it is ready.  Cinnamon was usually added (usually oil of cinnamon).  Some groups use cloves as well, although we didn’t.  Then the butter is placed in clean mason jars, can lids placed on them and they are set aside to allow time to seal.  It was through many applebutter makings that money was raised to help pay off the debt on the new building.

Along with applebutter, a group of ladies in the church and community began to meet every Thursday and quilt.  They would usually have a couple of quilts going at once.  People would create quilt tops, piecing them together by hand from scraps.  The ladies would set them up in a quilt frame, usually rolling them on two boards like a scroll, and setting the corners on wooden chairs.  Then they would quilt them by hand, tying the top to a quilt back (usually plain, white backing, with cottony filling in between.  The stitches were either in a diamond design or some other pattern, sewed as small as possible.  Conversation ensued as they worked together.  They would pause for lunch, which they brought from home to be shared with all present.  Then they would quilt a little more and get home around 3 p.m.  They did this for years, even after the note was burned on the new construction.

My earliest memories are sitting in the fellowship hall in the basement of Morrison Chapel, with quilts propped up along the walls in their wooden frames.  Rev. Reneau would be standing on a little impromtu stage near the kitchen window preaching.  The congregation was sitting in folding chairs, and I was on somebody’s lap trying to squirm my way to freedom in this meeting of Methodists.  Mr. Larkin would come to the church a little after service started, wearing his best bibbed overalls, shouting happy in the Lord.  I didn’t remember much from these earliest days, but I remember feeling that church was a good thing, that people loved me and each other there, and that we were excited about getting our building put up.

The steeple of the new church was laid out on its side in the parking lot.  Workers constructed it on the ground and then hoisted it up by crane to the top of the new brick building.  It towered over the building with great beauty.  The first Sunday in the new sanctuary I remember a large crowd, many men dressed in black suits near the back of the building, and lots of ladies throughout the building.  Our seating was no longer segregated.  The 1960s had brought us together.  The sanctuary was beautiful, with its big white altar in the middle of the “stage” as we called it.  The organ made beautiful sound and the choir sang with pride in their black robes. 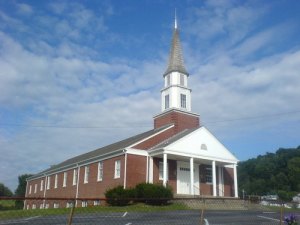 We dedicated the building in 1967, and continued working to pay it off until 1974.  The bishop came and burned the note for us, and we were so proud of this new building.  We filled it for a good long time, and enjoyed the fruits of our labor as we worked together.

An Appalachian CrossFitter who loves Jesus and is happily married to Tammie. I have a son and a fine little grandson. In the peak of middle age, trying to figure out the rest of this journey.
View all posts by Brad Scott →
This entry was posted in Uncategorized and tagged applebutter, Church, fire, Kingsport Tennessee, Methodism, new building, Quilt, rebuild. Bookmark the permalink.
%d bloggers like this: